Valentine’s Day Bible Stories: The History of Love in Scriptures 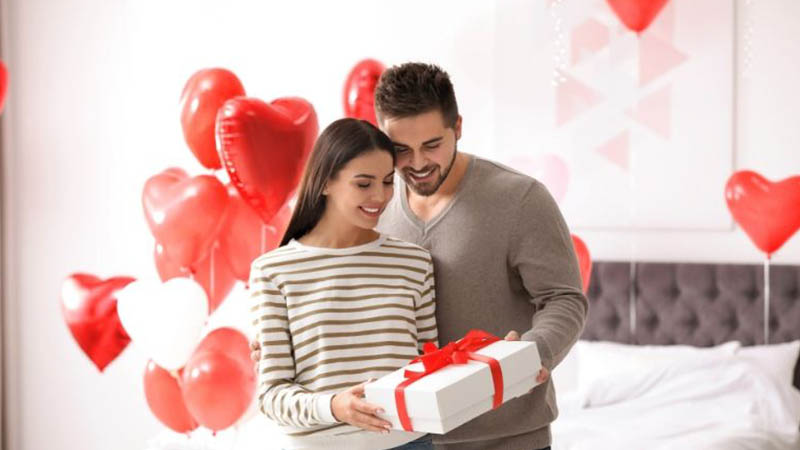 Valentine’s Day isn’t directly mentioned in the Bible, but any Christian knows that the scriptures are, in their entirety, “the greatest love story ever told.”

But beyond the overarching story arc of human history — one that involves a Savior who so loved the world that He came to redeem mankind — there are individual “Valentine’s Day’ stories in the Bible that are worth reading and reflecting on.

Anyone looking for Christian Valentine’s Day inspiration can find it by examining numerous Bible stories of love, hope, adoration and defying the odds.

From Mary and Joseph to Adam and Eve and Elizabeth and Zechariah, there’s no shortage of real-life inspiration that can be drawn from the scriptures. So, let’s dive right in:

One might not typically look at the narrative surrounding Mary and Joseph as a Valentine’s Day story, but it is a fascinating recounting of real-life events that can teach us quite a bit.

The story, which is told in the gospels, centers on Mary, a woman who found herself miraculously with child, and Joseph, a man willing to look past uncertainty to abide by God and enter into the couple’s planned union.

Matthew 1:20-24 (NIV) explains what unfolded after Joseph initially found out Mary was with child and considered not going forward with the matrimony.

“An angel of the Lord appeared to him in a dream and said, ‘Joseph son of David, do not be afraid to take Mary home as your wife, because what is conceived in her is from the Holy Spirit. She will give birth to a son, and you are to give him the name Jesus, because he will save his people from their sins.’

All this took place to fulfill what the Lord had said through the prophet: ‘The virgin will conceive and give birth to a son, and they will call him Immanuel’ (which means ‘God with us’).

When Joseph woke up, he did what the angel of the Lord had commanded him and took Mary home as his wife. But he did not consummate their marriage until she gave birth to a son. And he gave him the name Jesus.”

Joseph could have walked away, but he chose to listen to God and love Mary (and Jesus) anyway — a biblical Valentine’s Day story worthy of endless reflection.

The first Valentine’s Day story in the Bible unfolds in the book of Genesis when God created Adam and Eve.

The first humans — who also became the world’s first married couple — made some mistakes along the way, but they serve as a timeless biblical model of God’s creation, and His plan for marriage for humanity.

The husband and wife end up being the catalysts for all of the “firsts” in the human race, with their union serving as an example we can all look at.

Again, if you’re looking for Valentine’s Day in the Bible, you won’t specifically find it. But you will see stories like this one that speak to the power and importance of love.

The Book of Ruth delivers yet another powerful Christian Valentine’s Day message. You might recall Naomi’s ordeal; she suffered great loss after her sons and husband died. 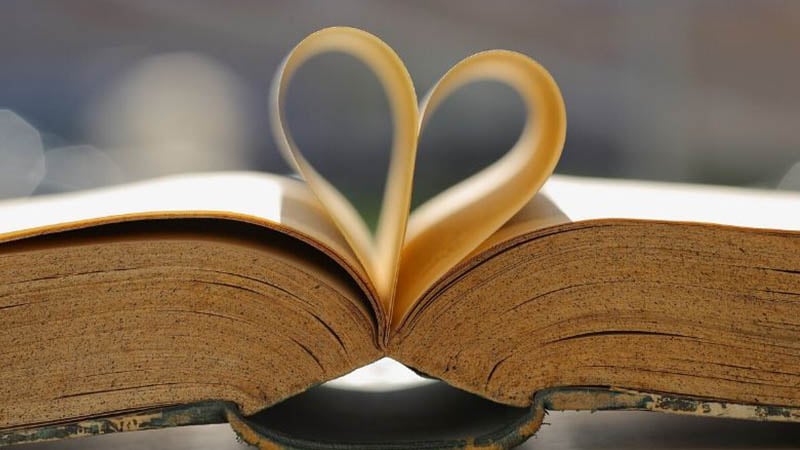 When she decided to move back to Bethlehem, Ruth, one of her daughters-in-law who was widowed, decided to go with her. As Naomi transformed from despair to happiness, a love also forms between Ruth and and a man named Boaz.

Ruth eventually marries Boaz, ushering in joy for the family and some Valentine’s Day history worth noting. Ruth 4:13-17 (NIV) tells this part of the story:

“So Boaz took Ruth and she became his wife. When he made love to her, the Lord enabled her to conceive, and she gave birth to a son. The women said to Naomi: ‘Praise be to the Lord, who this day has not left you without a guardian-redeemer. May he become famous throughout Israel! He will renew your life and sustain you in your old age. For your daughter-in-law, who loves you and who is better to you than seven sons, has given him birth.’

Then Naomi took the child in her arms and cared for him. The women living there said, ‘Naomi has a son!’ And they named him Obed. He was the father of Jesse, the father of David.”

This is just one of the many Biblical stories of love, offering some Valentine’s Day quotes from the Bible that are worth pondering.

Valentine’s Day in the Bible: Isaac and Rebekah

This brings us to yet another Valentine’s Day story in the Bible involving Isaac and Rebekah. Isaac, as Jewish and Christian readers know, was the son God promised to Abraham and Sarah. We learn in Genesis 24 that Abraham was old and found himself seeking a wife for his son.

So, he turned to a servant and asked him to find Isaac a spouse. It’s not your typical Valentine’s Day story to say the least, but in the end the servant met Rebekah and brought her back to marry Isaac.

Genesis 24:67 (NIV) tells us what unfolded after Isaac and Rebekah met: “Isaac brought her into the tent of his mother Sarah, and he married Rebekah. So she became his wife, and he loved her; and Isaac was comforted after his mother’s death.”

You can read more about this story in Genesis.

Our final exploration of Valentine’s Day in the Bible centers on Zechariah and Elizabeth. We find their story in the New Testament in the Book of Luke.

What’s perhaps most compelling about Zechariah and Elizabeth is that they face some of the same issues as many contemporary couples. Additionally, they are intricately tied to Mary, Joseph and the birth of baby Jesus.

Luke 1 reveals that Zechariah and Elizabeth were both old and unable to have children — a struggle many couples face. But then a miracle unfolded after the angel Gabriel revealed to Zechariah that he and Elizabeth would have a child.

Elizabeth reveals her joy in Luke 1:25 (NIV): “The Lord has done this for me. In these days he has shown his favor and taken away my disgrace among the people.”

This is yet another relatable Valentine’s Day story that gives us hope and confidence in the Lord. 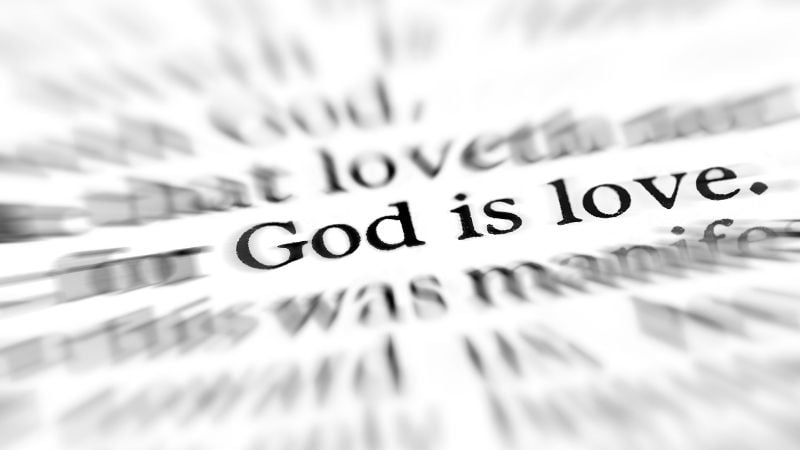 Valentine’s Day isn’t just about romance but a reminder that we are called to live out a biblical command to love others.

And over all these virtues put on love, which binds them all together in perfect unity.

The Book of Colossians, written by the Apostle Paul, reiterates his belief that love is the supreme attribute for Christians to strive toward. He detailed that in his letters to the Corthinians and now again to the Colossians. Paul believed that love would wash away any differences that believers, and non-believers, would face and be the uniting factor for all people. This scripture for Valentine’s Day is definitely one we could apply year round.

Above all, love each other deeply, because love covers over a multitude of sins.

According to the Apostle Peter, love was the trump card that every Christian should play. He believed that if Christians loved God and loved others, then it would cover all other sins and make forgiveness possible.

This scripture on love is a simple and straightforward one: Christians are called to put others above themselves. God wants us to serve Him and others and we can do that with love and actions.

But I tell you, love your enemies and pray for those who persecute you.

When God says “love others,” He means everyone. Even those who hurt us or betray us or who aren’t Christian. Our love for others, even those we do not like, will be the mark of our Christianity. It is how others will know we love and worship God.

Who shall separate us from the love of Christ? Shall trouble or hardship or persecution or famine or nakedness or danger or sword?

Committing your life to Jesus doesn’t mean that your life will be without trouble and this scripture about love reminds us that nothing can separate us from the love of God. He will be there through the good and bad times, alike.

Are you looking for more inspiring stories about love? Download the Pure Flix Hopeless Romantic Movie Guide to watch more inspiring and Christian Valentine's Day movies and shows — all accessible with your free trial. 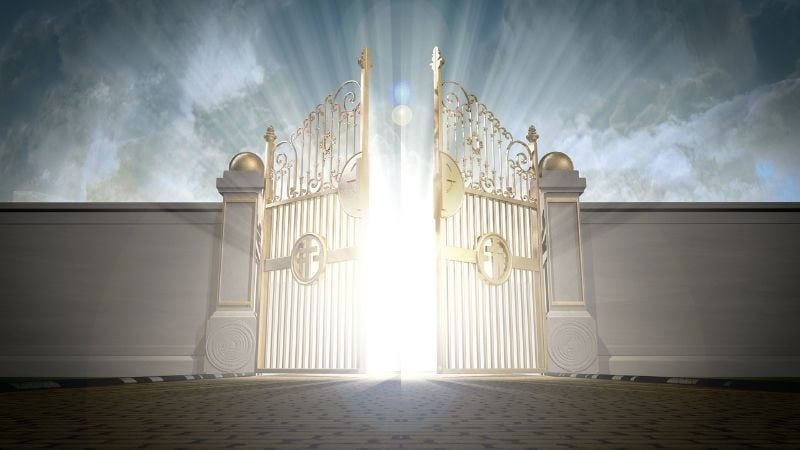 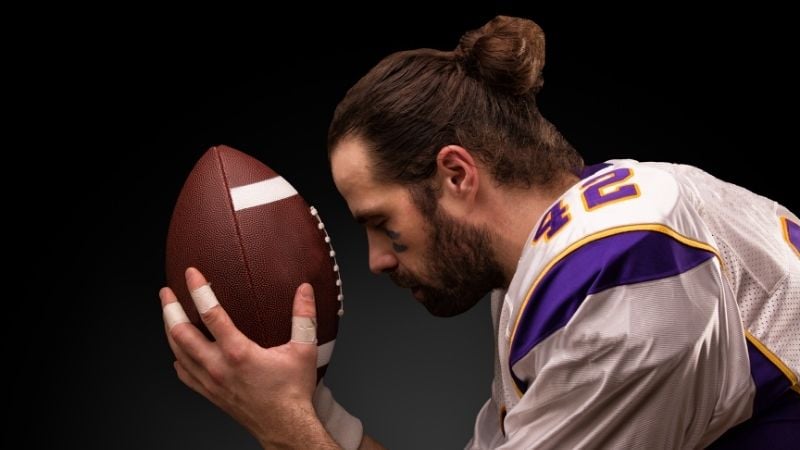 5 Christians in the NFL Who Are Living for Jesus