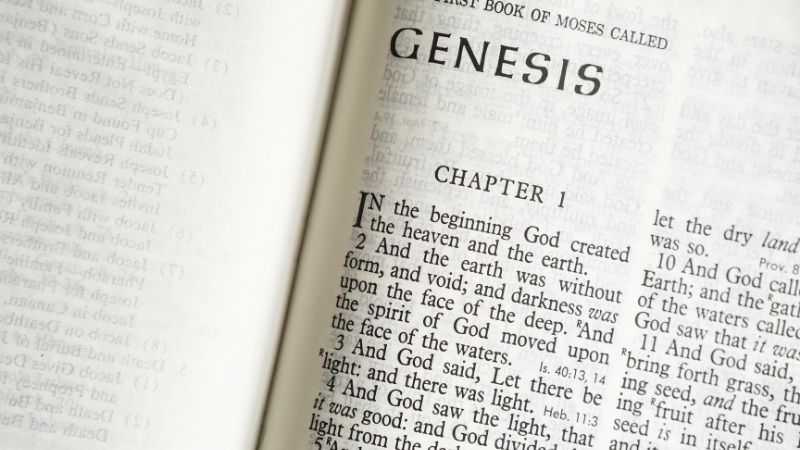 The Bible is filled with powerful stories that show us the true definition of love, but there are two stories in particular at the start of the biblical narrative that show us something else: what not to do when it comes to love.

The stories of Adam and Eve and Cain and Abel are worth considering, especially for those looking for guidance on the true definition of love.

If you’re looking for Valentine’s Day in the Bible you won’t directly find it, but you will see impactful stories like this that serve as blueprints — guidelines that showcase how to avoid the pitfalls of human error when it comes to love.

Part of loving and respecting a person is abiding by his or her wishes. In the Bible, we see God creating Adam and Eve, with the true definition of love being exhibited as God crafts mankind in His image.

In that process, the Adam and Eve story tells us how the Lord made Adam and then made Eve as a partner for him. Genesis 2:18 (NIV) reads, “The Lord God said, ‘It is not good for the man to be alone. I will make a helper suitable for him.’”

And while some will search the scriptures for the best Bible verse for Valentine’s Day, it’s perhaps more worthwhile to look at the Adam and Eve story, among others, to see why we must be careful how we handle our love for God and for others.

READ ALSO: If Love Is The Antidote, Where Does Truth Fall?

In fact, Adam and Eve show us the importance of obedience to one another and to God. As you might recall, humanity’s first couple was commanded by God not to eat from the tree of the knowledge of good and evil; they were warned they would “die” if they did. 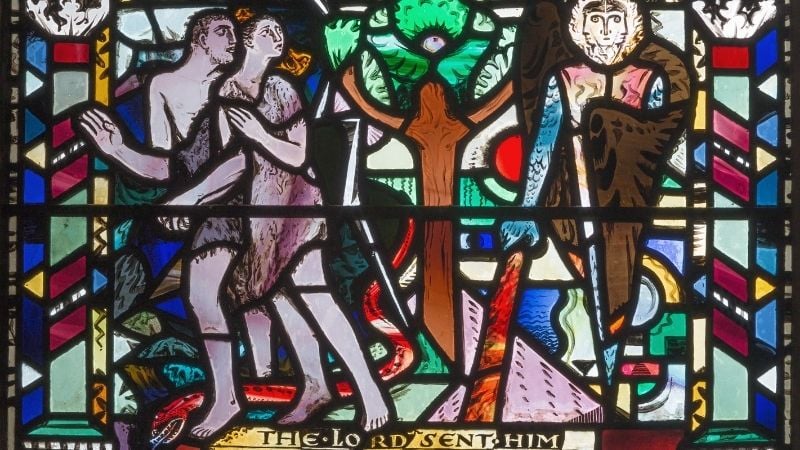 Many of us can relate to Adam and Eve, as we’ve likely done things we know we shouldn’t have, despite God’s warnings. Unfortunately, the mistake they made had sweeping ramifications for humanity and for themselves.

Genesis 3 tells us how the Adam and Eve story led to “the fall,” with a serpent convincing Eve to eat the forbidden fruit and with Eve handing some over to her husband. In particular, the dialogue between Eve and the serpent has much to teach us about God’s love for us (and evil’s attempts to sway us).

Satan tells Eve that she won’t die if she eats the fruit and that God is simply trying to prevent her from being “like God” and “knowing good and evil.” Once she saw the fruit as having the power to give her wisdom, Eve consumed it and the rest is history.

God banished them from the garden and humanity took on the toils of hard work. Some might see God’s handling of the situation as harsh, but it actually shows the true definition of love.

When we make mistakes and err in life, consequences teach us powerful lessons. A loving parent (and a loving God) would be remiss to allow us to run amok without care or worry over what could happen. Discipline is what helps us learn and grow — and that’s a central part of the Adam and Eve story. 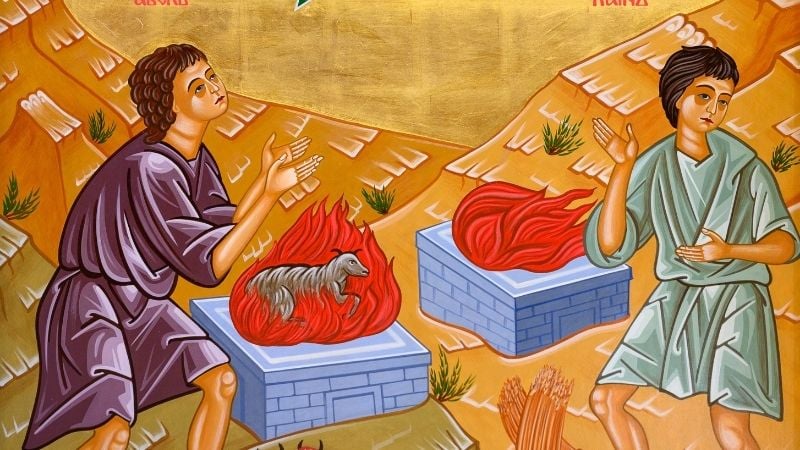 It doesn’t take long for the Bible to present us with another story that shows us anything but the definition of love. If you’re looking for evidence of Valentine’s Day in the Bible, the events in Genesis 4 might seem, on the surface, to have little to offer you.

But as we explore the Cain and Abel story, we might see that the best Bible verse for Valentine’s Day can be the verse that shows us in practice what not to do in our own lives.

The Cain and Abel story perfectly fits this narrative. We learn at the start of Genesis 4 that Adam and Eve gave birth to their firstborn, Cain, and they then later had Abel. Immediately, we see problems beginning to develop for the brothers in Genesis 4:3-5 (NIV):

God tried to speak with Cain, asking why he was angry and encouraging him to “do what is right.” It’s unclear what Cain’s issues are, but this dialogue alone is the true definition of love, as the Lord tries to reason with Cain.

In the end, though, Cain makes a disastrous decision. We learn that in the Cain and Abel story, rather than embracing love, Cain chose to kill Abel.

After the murder, God told Cain that he would become a “restless wanderer on the Earth.” But though Cain was punished, God marked him to protect him from being killed, again showing His love for His creation.

Again the Cain and Abel story offers us a blueprint that emphasizes the importance of clinging to truth and abiding by the Lord. When we fail to love God fully and abide by his truths, there are consequences.

Of course, there’s also the deeper reminder to love our family and friends. The Cain and Abel example is extreme, though fighting and disagreement can abound in families. But we must cut through the bickering and be sure that we are loving and living well.

Here are a few documentaries exploring the story of Genesis and the Adam and Eve love story even more. These titles, along with thousands of other educational and inspirational movies and TV shows are available to stream with a free trial to Pure Flix.

Want to see more on the love and romance front? Download our Hopeless Romantic Movie Guide here, and be sure to stream popular faith and family-friendly movies and TV shows right now on Pure Flix. 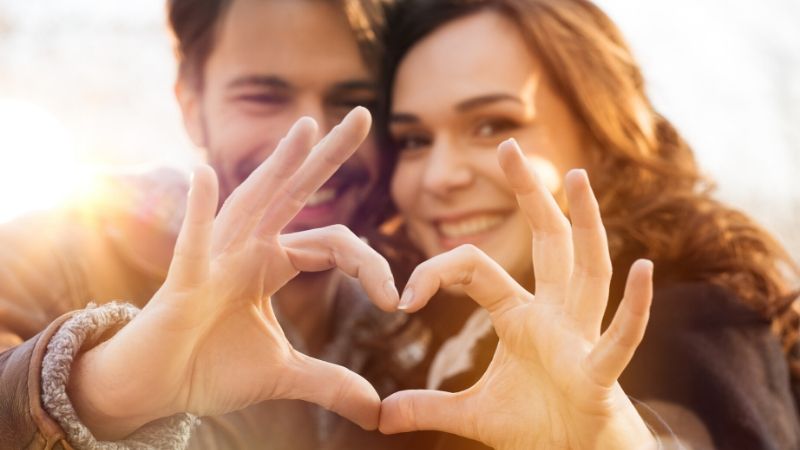 5 Transformational Scriptures (and Movies) About Love 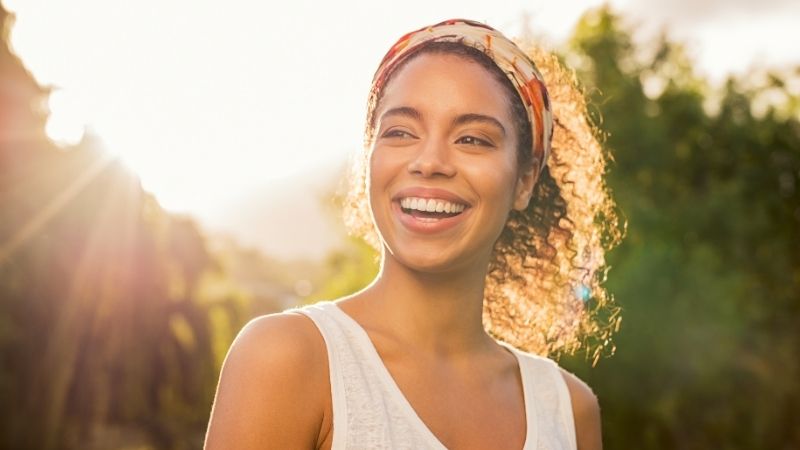